Last week Compugraphics attended Laser World of Photonics in Munich for the second year running.  The event was a great success with companies coming from all over the world to exhibit and take part in the show. 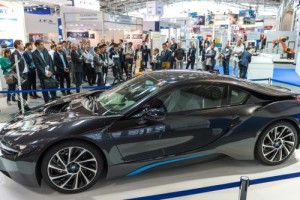 The Messe München International drew more than 30,000 attendees,1227 exhibitors (representing a 9% increase over the 2013 event) and even a few robots. The event gives visitors the chance to explore the diversity of photonics in manufacturing applications.

Start-Up World also took place at Laser World of Photonics and named the winners of the first-ever Photonics Award. The competition recognized the best product innovations from up-and-coming companies in a broad spectrum of optical technologies. The products entered by startups from all over the world address several applications, from biophotonics and medical technology to optoelectronics and additive manufacturing.

There was much to see at the event, from dramatic laser demonstrations to the new BMW i8 on display.

Get in touch to find out more.